A Response to the ASIC Threat 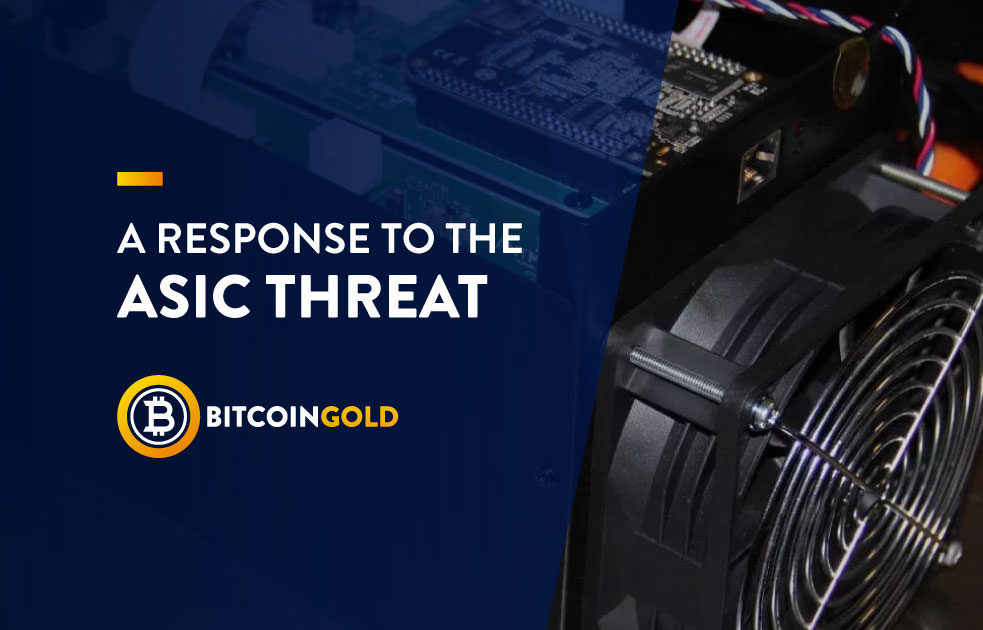 This week, we learned that the dominant specialty crypto mining hardware maker (Bitmain) has released an “ASIC” miner for Equihash, which means it would be able to mine BTG if we were to allow that to happen.

We will not allow that to happen.

ASIC-resistance is central to our mission. Bitcoin Gold, BTG, was conceived while watching the struggle between ASIC miners and the rest of the Bitcoin community. The fundamental reason for BTG’s creation was to help wrest back the crypto space from the relentlessly monopolizing tendencies of ASIC mining. How? By returning mining power to commodity hardware that is more universally accessible to people around the world: GPUs, or “graphics cards,” which nearly anyone can acquire and use.

This idea lives on in the original “code name’ for the project – BTCGPU – which is still the name of our GitHub code repository: BTCGPU.

We chose the PoW (“Proof of Work”) algorithm Equihash for the launch of BTG – an algorithm that Zcash first worked to develop and implement – because it was designed with the express intent of achieving a high degree of ASIC-resistance. The retail emergence of an Equihash-specific miner demonstrates that Equihash, as implemented today, is not as ASIC-resistant as necessary.

The Bitcoin Gold dev team is now working to fix this.

We’ve been planning to do this for some time – either by modifying how the Equihash algorithm is implemented, or by changing to an entirely different algorithm. Perhaps we’ll do each, over time.

The Monero team recently demonstrated that this works. When a Monero-mining ASIC was being released by Bitmain in March, the Monero developers changed their code to make those miners ineffective. We applaud their actions – and their success!

We’ll be releasing an upgrade to Bitcoin Gold in cooperation with the many partners in our ecosystem – including not just our own open-source projects, but also working with the developers of third-party wallets, mining pools, mining software, exchanges, various businesses relying on running full nodes… we’re even working with ASIC researchers who are assisting us in understanding the problems and how to best address them. Our solutions and code will be, as always, free and open-source to the crypto community at large. We’ll be releasing a more detailed plan in the coming weeks, providing plenty of advance notice so that none of our partners are taken by surprise.

The goal is to have no (or minimal) impact on the users and current GPU-based miners of BTG, apart from the need to upgrade certain software. We believe the BTG ecosystem will be ready to switch over to the upgraded version in approximately two months, and there is no expectation that this will result in an unintentional stray blockchain fork or alternate version of BTG.

We know this may not be a “one and done” solution. Our upgrade may make the current crop of miners useless for mining BTG, but this does not prevent them (or others) from trying again. Like the Monero team, the Bitcoin Gold Organization is committed to repeating this process as necessary. (The Monero approach is currently to plan a change of algorithm every six months. Our current plan is to make changes as the need appears.)

In time, anyone buying BTG-specific miners will learn that their investment is always lost, and the producers of this hardware will see that huge spending to develop custom hardware doesn’t lead to the profits they’re hoping to grab.

We’ll ensure that the ability to mine BTG is always available to anyone with access to a GPU – staying true to our mission, and keeping our promise to the BTG Community.

Carrying the torch forward, we are
The Bitcoin Gold Organization
#1CPU1VOTE