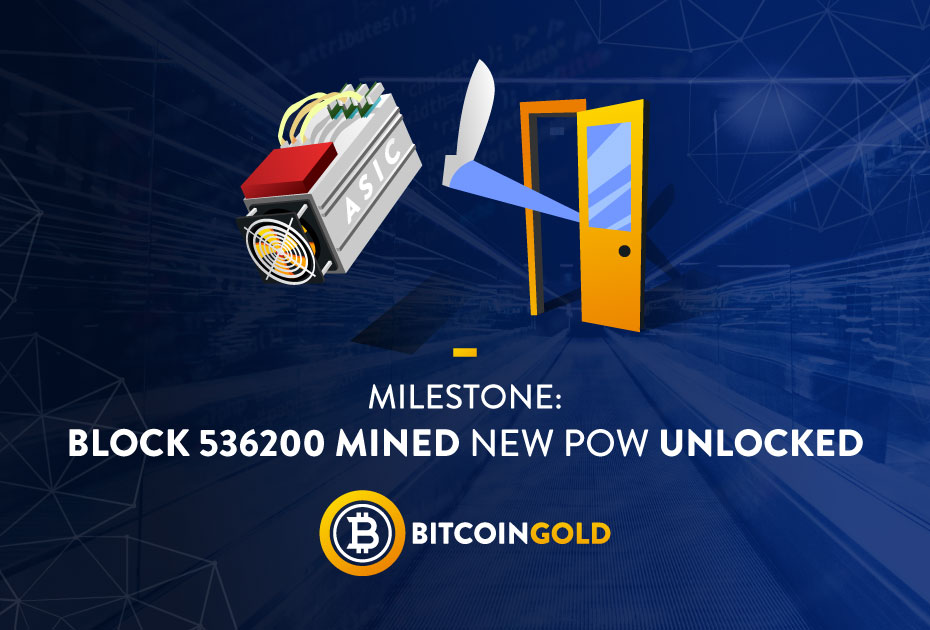 The Network Upgrade was a success, the blockchain is stable, and all partners can resume regular activities – including returning confirmation requirements to pre-fork levels.

It has been a long, hard couple of weeks, but we made it!

For anyone who doesn’t yet know:

Equihash-BTG, our new Proof of Work algorithm, can’t be mined by current ASIC miners, but can be mined by GPUs. So, this kicks them out of our pools.

The new algorithm also comes with personalization that makes it harder to re-direct mining power through a “hashrate market.” The recent “51%” attacks, which may or may not have involved ASIC miners, were channeled through hashpower rental markets – but with this change in PoW, there’s no longer a rental market for the algorithm we’re using, and it’s harder to set one up than before. This means more safety.

Meanwhile, LWMA, our improved Difficulty Adjustment Algorithm, makes our blockchain more responsive to shifts in hashpower so that the block time is more stable. The GPU hashpower market has become more liquid than it used to be, with more miners adopting “auto-switching” in pursuit of profit instead of supporting specific coin projects. As a result, hashpower can move quickly after a price move in one of several coins, leading to unstable block times. With our improved algorithm, the blockchain adjusts more quickly, providing a steadier flow of blocks.

Both improvements are up and running as expected.

A few technical notes about the new PoW algorithm, Equihash-BTG, are in order. It consumes vastly more memory than traditional Equihash, so ASICs are no longer able to mine, but GPUs with 3GB VRAM or more can keep working. It’s also important to understand that the new algorithm is about 15 times harder, so each miner produces about 1/15th as much hashrate as they did before. This means that our pre-fork network hashrate of 25 to 30 MSol should be expected to decrease to between 1.6 and 2.0 MSol – which is precisely the range where we stabilized after the hardfork! We’re delighted to see we’ve had no net loss of miners due to the PoW change!

The new Difficulty Adjustment Algorithm also appears to be performing just as well as we hoped. At the time of the Upgrade, the Difficulty was intentionally dropped* down sharply, so the initial 45 blocks after the hardfork came rapidly – just under 2.5 minutes per block. Then the new DAA kicked in (when the required 45-block averaging window filled up) and began adjusting the Difficulty upwards based on the block time, bringing the average block time up to the 10-minute target within a day.

Safety and stability. Two great improvements that everyone can appreciate!

In the three days since then, the block rate has been much more consistent than it was before, both because of our escape from the volatile hashpower rental market, and because of a better-balanced and more responsive DAA. On top of that, the removal of the rental market means the removal of a major attack vector, resulting in massive improvements in safety and stability. That’s two great improvements that everyone can appreciate!

A Bit of Thanks

We’re grateful to our diverse pool of miners – and our network of mining pools – for working hard to get through this critical period. Now that the blockchain is stable, it’s safe for all our partners, including exchanges, to resume regular activity. Everything is back to normal, so it’s time to get back to work – including reopening wallet systems and returning confirmation requirements to pre-fork levels.

Everything is back to normal, so it’s time to get back to work.

We appreciate the hard work and confidence shown by all our partners – miners, pools, exchanges, wallets, explorers, merchant services – this upgrade kept everyone busy before and after the fork, and we thank them all for their diligence. Any partner experiencing any difficulties is more than welcome to reach out to the team for assistance.

Up Next – Great Things!

We know that this a milestone, not an endpoint. It’s just a waypoint we pass on the way to better things. And though a lot of us have been focused on this hardfork, others have continued working other projects – so we have many great things to share with the Community in the coming days and weeks!

*The Difficulty was dropped to compensate both for the harder Equihash-BTG mining, and to compensate for an inevitable temporary reduction in miners at the time of the transition due to miners needing to shut down, make changes, and start up again.