BTG Transparent: a Live Balance Page for the BTG Endowment 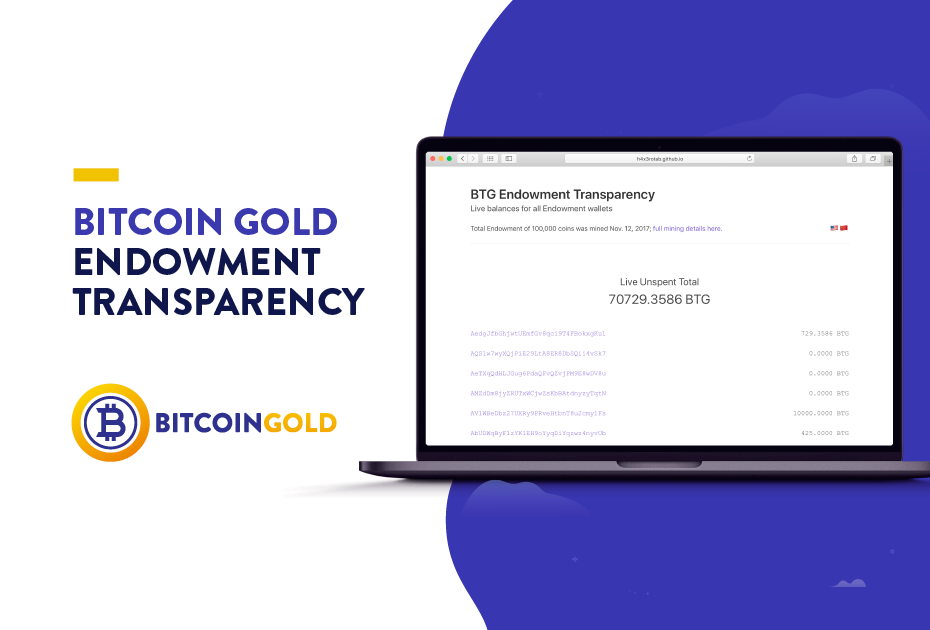 To make it easier for the Community to monitor the Bitcoin Gold Endowment, we’ve created a transparency site. Click the button to see the current balance.

The BTG Endowment supports the ongoing BTG project and is currently the only source of funding for expenses and salaries. All Endowment expenditures since it was launched have been made based on the decisions of the Board of the Bitcoin Gold organization. The Endowment is controlled by “four of six” multi-signature wallets, which ensures that no single individual can spend from the Endowment. (The initial Board was comprised of the six co-founders of the project, and the current Board membership is always publicly visible on the BTG Team page.)

no single individual can spend from the Endowment

Where is the Endowment?

These wallet addresses and balances have been public on the blockchain since they day they were mined (Nov 12, 2017). The addresses have also been published in a previous Endowment Wallet blog post.

This new website tracks the live unspent balance of the entire BTG Endowment, making it easy for anyone to check for themselves. Live balances for each wallet are pulled using the Insight API at the official BTG Explorer, but the balances can be checked at any explorer. The Live Unspent Total may take a moment to load because all individual wallet balances must be pulled, first.

making it easy for anyone to check for themselves

The list of wallet addresses includes our Flexible Spending wallet. To simplify administration, some funds are periodically moved from an Endowment wallet into the Flex wallet, which requires only 2 of 6 signatures to be further spent. Expense reimbursements, salaries, bounties, or other expenditures are then paid from the Flex wallet. Any funds in the Flex wallet are unspent and belong to the Endowment, and are shown at the top of the list.

The other 152 wallets in the list are the original BTG Endowment (“premine”) wallets which were mined in 2017. All of these wallets are “four of six” multi-sig wallets, with the six keys originally held by the six co-founders of the BTG project. In addition, 60% of the funds were mined into time-locked wallet addresses which gradually become available each month over the course of three years. (You’ll notice there are four wallets for unlocked funds, and then four wallets for each month’s time-locked funds – the wallets were broken into four groups with four different sets of six keys; this was insurance against the (extremely unlikely) event that some set of keys becomes exposed. See the Endowment Wallet blog post for exhaustive details on the mining process.)

This arrangement of wallets may seem overly complex at first glance, but the co-founders of the BTG project took the safety, security, and longevity of the mined funds very seriously. The multiple multi-sig wallets, time locks, and Board oversight ensure that the Endowment funds are not at risk.

multiple multi-sig wallets, time locks, and Board oversight ensure that the Endowment funds are not at risk

Bitcoin Gold (codename BTCGPU) began as a fork of Bitcoin after block height 491406 on Tue, 24 Oct 2017 01:17:35 GMT and began being mined as a separate chain at block height 491407 on Sun, 12 Nov 2017 13:34:01 GMT. As described in the original Bitcoin Gold Roadmap / Whitepaper, the mining rewards from the rapid first 8000 new blocks (100,000 BTG, or 0.476% of the 21 Million BTG cap), were collected into a set of wallet addresses to form a fund to support the ongoing costs of the Bitcoin Gold project. These 100,000 coins, sometimes called a “premine,” made up the BTG Endowment. All mining rewards after these first 8000 blocks accrue solely to the miners; no portion is diverted to the founders or the BTG project.