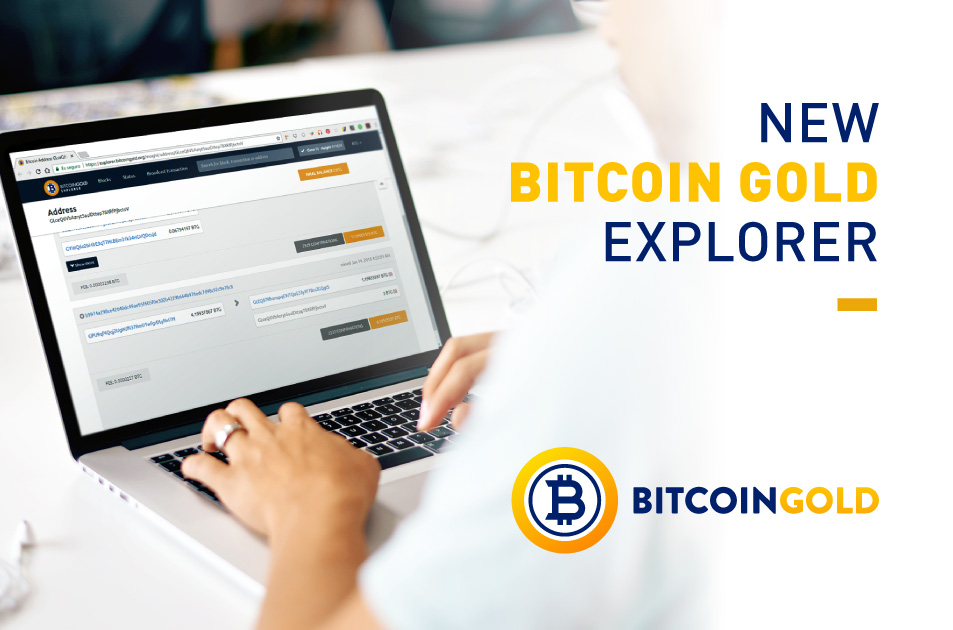 We’re ready to officially announce our new Blockchain Explorer, which some of you may have already noticed on a not-so-secret web address:

More than “just another explorer,” this is a fully functional Bitcoin Gold Insight instance and web application service presenting the Insight UI and Insight API. It runs on a full Bitcoin Gold Bitcore Node and is hosted by the Bitcoin Gold Organization.

What on earth does that mean?!?

Well, let’s start with what an Explorer is! A Blockchain Explorer is a website that lets you do the following kinds of things:

That’s the basic idea of an Explorer… But our new Explorer also does things that some others don’t. For example, it shows incoming transactions which are not yet part of a block. For those who don’t know, when a new Bitcoin Gold transaction is sent to the network for miners to pick up, they’re held in a pool of transactions in memory (the “mempool”) until miners confirm them in a block. A confirmed transaction won’t show up in a block for about ten minutes (on average), but a new transaction will show up in the mempool mere seconds after it was sent. This is a great way to confirm that a transaction you sent actually reached the network… or, if someone is sending coin to you, a way to see that they already sent it!

That’s the Explorer. What about the API Part?

An API, or Application Programming Interface, is a crucial component of blockchain-related services, including wallets and payment services. Our new explorer gives free public access to a well-known and well-developed API, which developers can use to write and test code. This makes it easier for developers of all kinds to integrate BTG into existing projects, or to make new projects.

The team has put considerable time and effort into making sure this Explorer will remain stable and reliable – ours are backed by redundant servers, hosted in multiple global locations, and protected behind Cloudflare. In short, we’re treating it like the important piece of infrastructure it is. We know that when people start building projects that rely on our Explorer, they want to be sure it remains available.

Lastly, we’ve made the full source code for the explorer available for others to see and use. This is important because anyone running enterprise-class systems that rely on Insight’s API will want to be able to run their own servers to manage the load and the security. (Developers of large-scale products who need access to a High-Availability instance are invited to reach out to us; we can assist with solutions and/or guide them in standing up their own environment.)

We can’t claim credit for all the wonderful capabilities our new Insight Explorer has – that goes to BitPay, who made the original version, and SatoshiLabs (the people behind Trezor) who forked that original and are maintaining a branch that supports Bitcoin Gold. What we’ve done is stand up an Explorer for public use and implemented a robust architecture behind it. Providing this code and this infrastructure to the developer community are an important part of enabling greater growth and adoption. It allows individuals and organizations – big and small – to implement BTG more quickly and more easily.

Whether you’re a professional developer or hobbyist – or, for that matter, just BTG-curious – feel free to go to the new site and, well, EXPLORE!

Hoping you have fun with it,
The Bitcoin Gold Organization
#1CPU1VOTE